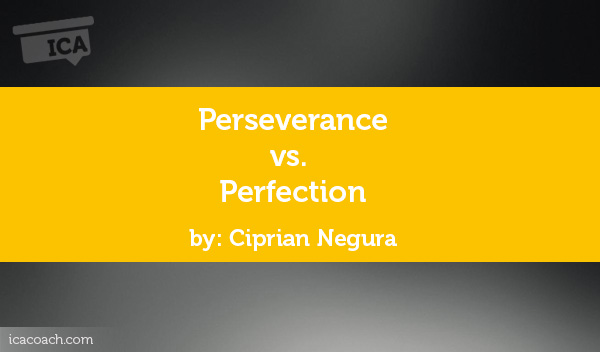 Perseverance, a characteristic of willingness defined by sustained – continued and renewed – efforts towards achieving a specific goal1.

As one can see from the definition above, first of all, perseverance is a characteristic of will. We cannot talk about perseverance in the absence of willingness, which makes perseverance often times and for several individuals hard to manifest. In the pursuit of their goals, some lose the power to sustain and renew the efforts toward achieving them.

Perseverance is also defined as “a voluntary effort sustained over a longer period of time, even in conditions when apparently the continuation of activity would not be possible”2

Thus perseverance is not only a voluntary act, but it is also defined by the continued manifestation of the will over a longer period of time despite the appearance of difficulties in pursuing one goal. It is our decision to keep going despite the perceived barriers that lead us to success in achieving these goals.

As Tony Robbins describes in its book Awakening the Giant Within,

the most powerful way to shape our lives is to get ourselves to take action… It’s not what we do once in a while that shapes our lives, but what we do consistently…Everything that happens in your life – both what you’re thrilled with and what you’re challenged by – began with a decision. I believe that it’s in your moments of decision that your destiny is shaped.

Perseverance proves to be determined by several factors like:

Perseverance also requires patience and acceptance, being kind to one’s self and others’.

Its absence, unfortunately, leads to abandonment of goals and drop out from their pursuit, which then leads to disappointment and self-blame.

Creating sustainable change and stickiness of new behaviours – certain habits – thus requires unconditional perseverance; even if the progress seems unsatisfactory and minor at times, and our internal voices, our saboteurs, tell us a zillion lies/reasons why we should quit, perseverance is the one that brings results in the long run; it is not even the small and barely noticeable progress that contributes to this overall success but rather the will of “not quitting” that is more important.

It is also the Compound Effect3 of the small and insignificant increments that ultimately creates the sudden and surprising change effect; as Darren Hardy, the author of the book with the same name defines it,

the Compound Effect is the principle of reaping huge rewards from a series of small, smart choices … even though the results are massive, the steps, in the moment, don’t feel significant. Each choice that we make is manifested through a behaviour that over time becomes a habit. …it’s the frequent, small and seemingly inconsequential choices (we make) that are of grave concern.

This might also prove true because of the exponential law that seems to govern our existence, as per the conclusions of extensive research formulated by a group of scientists like RayKurzweil4, Peter Diamandis & Steven Kotler5 and Salim Ismail6. While Mr Kurzweil formulated The Law of Accelerated Results7 in relation to the exponential technological evolution and the imminence of humanity reaching Singularity rather sooner than later, Mr Peter Diamandis and Steven Kotler studied the application of this law in several phenomena surrounding our evolution and current presence. In their books (Abundance: The Future Is Better Than You Think and BOLD) the two authors present hard facts about the exponential nature of several studied phenomena as opposed to the more popular thinking that our evolution – and hence most of the phenomena in nature – are linear in evolution. 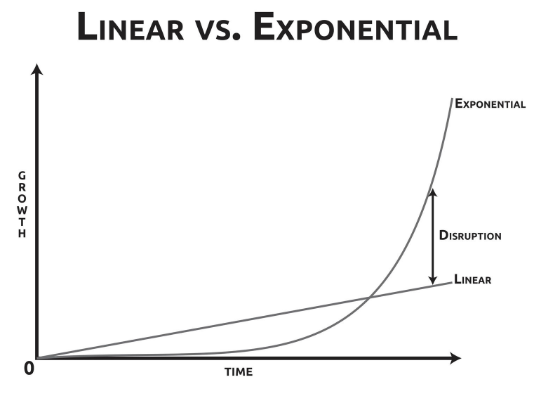 As such, perseverance helps us get through the “deceptive” phase of the exponential evolution of our transformation where the progress seems small and insignificant until the change becomes…well… sudden and exponential.

4 “The Singularity is Near” by Ray Kurzweil, (2006) from Penguin Books, ISBN-13: 978-0739466261
5 “Abundance: The Future Is Better Than You Think” by Peter H. Diamandis and Steven Kotler (2012, 2014) Free Press
6 “Exponential Organizations” by Salim Ismail, Michael S. Malone, Yuri van Geest, (2014) First
Diversion Books, ISBN: 978-1-62681-358-8
7 http://www.kurzweilai.net/the-law-of-accelerating-returns The Law of Accelerated Returns formulated by Mr Ray Kurzweil formulated that “an analysis of the history of technology shows that technological change is exponential, contrary to the common-sense “intuitive linear” view. So we won’t experience 100 years of progress in the 21st century — it will be more like 20,000 years of progress (at today’s rate). The “returns,” such as chip speed and cost-effectiveness, also increase exponentially. There’s even exponential growth in the rate of exponential growth. Within a few decades, machine intelligence will surpass human intelligence, leading to The Singularity — technological change so rapid and profound it represents a rupture in the fabric of human history. The implications include the merger of biological and non-biological intelligence, immortal software-based humans, and ultra-high levels of intelligence that expand outward in the universe at the speed of light.”

In my own personal development journey, I found that one of the great saboteurs of perseverance in many instances – and more acute for a specific type of personality – is the pursuit of perfection. While not all people search perfection with the same endurance, for “perfectionists” things have to be either perfect or nothing at all. And that is – in my opinion – the big trap :)!

Note: As a matter of fact, there are so many people searching for perfection that there is a category called “Perfectionist” in most of the personality tests (see Frameworks and Models for DISC, Strengths Finder, etc.).

Perfectionism is also listed by many psychologists as one of the main saboteurs of positive thinking. For instance, Shirzad Chamine8 in his Positive Intelligence (PQ) framework defines the Stickler saboteur as one of the 9 accomplice saboteurs accompanying the master one, The Judge. He describes the Stickler as “perfectionism and a need for order and organization taken too far.” Mr Shirzad also identified the impact of perfectionism on self and others:

Despite some kind of positive impact that perfectionism can also have upon its believers – “punctuality, being methodical, working overtime to make up for others’ sloppiness and laziness perfectionists are mostly sensitive to criticism, can be irritable, tense, opinionated, sarcastic and highly critical of self and others. They also have a strong need for self-control and self-restraint.”They judge and are quite non-adaptable by believing that “right is right and wrong is wrong and they know the right way.”

“Perfectionism often brings constant frustration and disappointment with self and others for not living up to the high standards.”

Goals should be SMART, broken in smaller (achievable) steps

A good technique to keep one on the track of its chosen transformational journey is breaking down the goals in specific, measurable but also achievable, realistic and time-bound (a.k.a. SMART) smaller objectives. Such objectives are easier to reach and measuring the progress – as well as the incremental achievements – are reinforcing the willingness to continue the journey.

As a process, I would relate back to Tony Robbins that introduced in its ATGW book, The Ultimate Success Formula as “an elementary process for getting you where you want to go: 1) Decide what you want, 2)Take action, 3) Notice what’s working or not, and 4) Change your approach until you achieve what you want”.

This process does require perseverance but its manifestation brings the desired long-term, sustainable change and ultimately, happiness.

The principle of “progressive/stepped effort”

In coaching The Perfectionist – myself – I found that a good and efficient way of coping with the pressure of perfectionism is the simple acceptance of a progressive approach. This means starting with small steps toward the big goal, making a commitment not to drop out of the process, no matter how small or “imperfect” progress seems to be. The continual manifestation of this will – perseverance – led me to ultimately improving my results and progressively achieving better performance, yet not in a linear path but an exponential one.

Acceptance of this stepped approach ultimately led to the development of several new habits.

As a concluding remark, I find it that the unwanted effects of Perfectionism can be successfully defeated through the acceptance of progressive bus continual and relentless manifestation of the will to act towards achieving the proposed goals, namely through Perseverance.