Certainty vs. Complexity in Our Conversations Daily

Flexibility, ambiguity, change, complexity, global, crowdsourced, collaborative…these words make an appearance in our conversations daily. Conversely, you will hear clients mention certainty, clarity, confidence, action, high reliability, evidence-based. We are asked to display traits in job interviews, performance plans, workgroups, and most importantly leadership that reinforce these statements. How do we lean into this with confidence and credibility? Based on our human nature, is it even possible?

When looking at the dynamics of human beings and how we experience the world it has been widely accepted that our most basic instincts drive our motivation and action. Both the brain and body are affected by these drives. Threats in our environment are managed through survival instincts fight/flight and freeze (Cannon, 1915). These defense mechanisms are enacted to create action towards a safer conclusion.

The Cognitive Behavioral Triangle, used in CBT, helps to define the steps that take place in our cognitive process and where the opportunity lies to affect change. Aaron Beck identifies the following steps: An event occurs which is then followed by a thought, thoughts change the way that we feel and behave. Without intervention, the process continues to repeat itself. 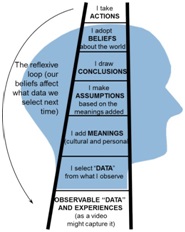 The “Ladder of Inference”, created by Argyris (Senge, 1994), further dissects how our brains adjust during the cognitive process, specifically during the “thought” phase.

Following the event, we immediately work through the thought portion and based on our interpretation of events create the emotions, behaviors, and physiological response. Rewards or punishment cues are experienced and a feeling is accompanied.

Internal Representation of Certainty vs. Complexity in Coaching

The internal representation of rewards and punishment give us cues to how we should respond. When our stress response is generated the stress chemical, Cortisol and Norepinephrine is released and interpreted as a threat response. A reward is represented by the release of Serotonin and Dopamine and results in the expectation of pleasure.

David Rock says A sense of certainty is one of the brain’s intrinsic goals. (Rock, 2021) At a fundamental level in the brain, certainty has to do with the ability to predict, using past patterns to prepare for what comes next. (Rock, 2021) Everything we do moment to moment is based on predictive patterns. (Rock, 2021)

“We are pattern recognizers who seek escape from ambiguity and indecision.” (Burton, 2008) Patterns and simplicity lead to certainty which in turn produces the reward center of the brain resulting in the release of serotonin which is interpreted pleasurably and leads to a sensation of safety. What effect does this have on coaching?

The feelings of certainty and conviction are involuntary mental sensations, not logical conclusions. (Burton, 2008) Intuitions, gut feelings, and hunches are neither right nor wrong but tentative ideas that must then be submitted to empirical testing. (Burton, 2008) If such testing isn’t possible, then we must accept that any absolute stance is merely a personal vision, not a statement of fact. (Burton, 2008)

If coaching is, “partnering with clients in a thought-provoking and creative process that inspires them to maximize their personal and professional potential. (About, 2021) The process of coaching often unlocks previously untapped sources of imagination, productivity, and leadership,” (About, 2021) then the need to offer clients the opportunity to gain perspective on how these mechanisms may affect their decision-making will be an important tool to have in our toolkit. We help create the space to delay gratification and/or reframe our automatic response to empower our clients to envision and create a path to greater success.

In contrast, complexity creates mental and physical stress. Complexity, sometimes referred to as doubt, is defined as the quality or condition of being difficult to understand or of lacking simplicity.

Uncertainty is translated in the body the same way physical pain is. To experience complexity means you will inevitably feel the emotion of uncertainty and thus the bodily representation of physical pain.

Futurist and author, Bob Johansen says, Volatility, Uncertainty, Complexity, and Ambiguity — VUCA — are the realities of today and it won’t be getting easier. (Leadership, 2020) Leaders must accept this reality. (Leadership, 2020)

The Interplay of Certainty vs. Complexity

The interplay of certainty and complexity is often present in coaching conversations as traits supporting leadership success. Two examples of this are the need to make informed decisions with confidence and an aptitude for a VUCA world. Leaders and teams are being asked to manage and excel in the ever-changing work environment in a way that is magnified compared to what has been asked in the past. Coaches encountering the need to behave with certainty within the midst of complexity will likely increase. Viewing each as a power tool where each lies at the end of an ever-present continuum will assist us in the skill of balancing the individual’s need for certainty and physical comforts/ rewards with the environmental demands that so often face our clients.

Power tools are often viewed as opposites, one empowering and one disempowering. I argue that both of the aforementioned views are needed for success depending on the individual and their challenges. Each offers the opportunity to keep the “this vs that” framework in an effective manner. Partnering with the client to review perspectives and learnings will assist them in successfully tackling the reality of the work they do. Offering both as an option gives them a chance to define for us the current need and offers us a chance to support them appropriately.

The title “Leadership for the 21st century: The intersection of the traditional and the new”, a recent Deloitte article, exhibited echoes of this concept and its impact. The article discussed the need for traditional leadership traits, traditionally being identified by Merriam-Webster dictionary as inherited, established, or customary patterns of thoughts, action, or behavior. This is closely tied to the feeling of certainty which we know results from pattern recognition and the state of not doubting something. The “New” refers to “never existing before; appearing, thought of, developed, made, produced, etc. for the first time” (Collins) which on its own does not equate to complexity however in conjunction with the fast-paced, rate of change present in work the idea of “new” is often shrouded in complexity. The work cites the need for leaders to manage both the traditional, known, aspects of work and “capabilities such as leading through ambiguity, managing increasing complexity, being tech-savvy, managing changing customer and talent demographics, and handling national and cultural differences.” (Erica Volini, 2019) 81% of respondents to the Deloitte Human Capital Trends Survey, 2019 state new leadership needs include the ability to lead through more complexity and ambiguity. (Erica Volini, 2019)

It feels predictable that we, as leadership coaches, may be asked by our clients to assist in building certainty and valuing complexity in an actionable way. Either one can feel like a barrier or a limiting factor. They can also take on the role of creating growth in our perspectives. Neither is wrong or right, they just are and various factors, both internal and external inputs, will prompt the need to address the effects as we make decisions.

Though predicted as a leadership competency need our current state has called attention to it in a greater way. The dichotomy of certainty and complexity is palpable and the desire for leaders to present in ways that manage both effectively is highly valued. We are living in a pandemic. Leaders especially are being asked to create safety in a complex world. A craving for the feeling of certainty is widespread and our environment is placing before us complexity on a mass scale. It seems impossible to have one without the other and yet our body pushes us in one direction that historically protected us and now is being perceived in some situations as a liability. Creating a place for leaders to bring their reality and process their experience with psychological safety will help to address our innate human shortcomings while respecting the beauty of the chaos it brings. This is where our role as coaches lies.

A coach approach is uniquely positioned to support our clients while in this zone and to do so from a reliable and valid framework. “Coaching is valuable because none of us transform our thinking on our own. Humans are masters at rationalizing hastily made choices no matter how logical we think we are.” (Reynolds, 2020) When done on an advanced level we create what Marcia Reynolds refers to as a “transformational experience” for them. She says, “Transformational coaching works from the inside out. (Reynolds, 2020) Reflective inquiry is a powerful way to create the disruptions in thinking that lead to breakthrough transformation and change.” (Reynolds, 2020) Our intent with clients is to assist them in the process of reframing perspective and prepare them to be successful moving forward.

Powerful Questioning Skills Help the Client Learn and Internalize Insights: Some Favorites From Reynolds (Reynolds, 2020) And Others Include:

With Permission, Activities That Can Assist Include: