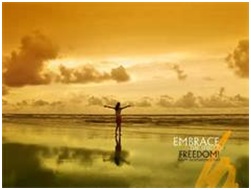 Blocks are much like limiting beliefs.  They are tiny mad thoughts in our minds that prevent us from taking action, growing, and living to our fullest potential.  The more you think about the block the more it prevents us from moving in the right direction.  To remove the block we must recognize it as something holding us back and preventing us from moving forward.  After we recognize it understand how it got in our thought process in the first place.  Next we would need to replace the limiting belief with a new empowering thought to move us in the right direction.

Freedom is a state of being without blocks or limiting beliefs holding us back from living to our fullest potential.  Freedom can be achieved through consistently recognizing a limiting belief and shifting our perspective to an empowering thought.  Once we are free from blocks holding us back then we take positive action in the directions of our goals and dreams.  To me freedom means I am living as my best self, thinking empowering thoughts, and taking positive action.

For to be free is not merely to cast off one’s chains, but to live in a way that respects and enhances the freedom of others. Nelson Mandela

As a coach how can we help others overcome a block in their thinking pattern and find their own sense of freedom?  Helping a client’s see their limiting beliefs could be a matter of asking them if their thoughts are serving their higher self.  Asking deeper questions to understand how the thought got in their thought pattern in the first place, and shifting their perspective to more empowering thoughts.  Coaching the client to realize their limiting beliefs and overcoming blocks can often times become an ongoing journey throughout their coaching sessions.  Techniques to use during the coaching sessions would be having the client visualize themselves accomplishing their goals, writing down empowering thoughts to replace the limiting beliefs, and encouraging the client to take positive action.