Reframing perspectives through the wheel of life

When one thinks of coaching, many thoughts and perceptions accumulate in the brain to try and reach a logical explanation on what coaching is, how it can be utilized, and who can benefit from this.

The response to these questions is that Coaching is simple:  Anyone if they want to0, can be coached and can benefit as it focuses on the here and now, not in the past, and has no preference in age, gender, race, or religion. Coaching is not a psychology or psychiatry as it is not a clinical or medical practice – more so it is not as complex as it does not explore, traumas, fears, or disorders and try to ‘fix them’ through medication or other clinical therapeutic methods. It is however unbiased, non-judgemental, and follows a code of ethics like most other professions do also the coach holds complete confidentiality within a session to which both parties are bound by an agreement that both parties sign before the sessions. Coaching holds an array of power tools, frameworks, and models that are used by an individual called a coach that explores a topic brought to the table by the client at the start of a session.  With a topic within a coaching agreement coach, the coach brings awareness to clients this could be through underlying beliefs on different perspectives, asks about any obstacles or challenges, and together formulate an action plan and later accountability. The coach simply aids the journey to the client with some company towards the destination that the client has chosen, both equipped with a common goal made through a mutual understanding and acknowledgment from the start. Below are the power tools used and defined in the ICA:

Also, some frameworks can be utilized to complement those mentioned above :

The coaching power tool which I find most powerful is reframing perspectives and the International Coaching Academy cited this as follows [1]‘Perspective is a point of view; a way of looking at or interpreting a particular set of events. We all have perspectives about our world and the circumstances we find ourselves in. More so [2]‘Your perspective determines your experience in life, not your circumstances.’ However, to be able to use this power tool, I find that it could be coupled or blended with a framework or model such as the Wheel of life. An example of how I have used this power tool and framework together is with a client who did not understand why she was unhappy and in which particular area in her life this emotion came from she felt completely attached to her life choices.

‘[3]Definition of attached. 1: connected or joined to something see the attached document a house with an attached garage. 2: emotionally connected: having strong feelings of affection or connection. These are happy and well-adjusted children who are very attached to their adoptive family’.

Once the definition of the word attached was put into place and The coaching agreement was discussed and made: being to unearth which area in her life this feeling was coming from, bring awareness to it and then be able to reframe her perspective, detach herself or change accordingly depending on what she discovered in her sessions.

She explained that she had her own business which was going well, traveled often, which she loved, had her apartment, her friends and family were nearby, she exercised regularly and was with her boyfriend for a while now. All areas from an external point of view and description seemed fine, however from an internal perspective they were not and she was unhappy.  There were many facets and emotions in her life that were intertwined with one another so I decided to invite her to use the Wheel of life.

The wheel of life was invented by Paul J. Meher and is a framework used that shows the helicopter view or bird’s eye view of your life. the circle is drawn, divided into sections then each pie is named and numbered from 1 -10 with this in place the wheel of life one can pinpoint which area of one’s life needs to be looked into. With Claire, we split the pie charts into 10 and she rated the areas of her life she was the happiest in and the lowest number for the least happy. 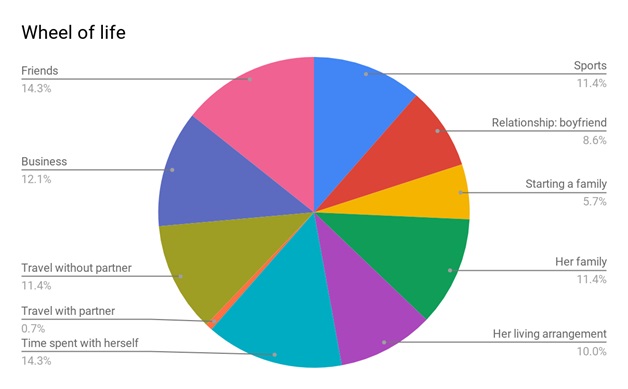 As we can see above the happiness spectrum which scored the lowest were:

They pointed to the external part of her life, two main areas that needed to be addressed starting and family and traveling with her partner, the fundamental issue was, in this case, her relationship yet to reach that she needed to explore the two areas.

Clare said she wanted to start a family and be married and talking about this made her very happy, the wheel finder contradicted this. When I asked if she saw any obstacles, she stated that before this could happen she first needed to get married for religious reasons instilled by her family values. Her underlying beliefs were clear no children before marriage. Her family made this very clear and she was comfortable and agreed with this. She and her partner had discussed this, yet talking about it with him left her feeling numb. I asked what the literal action she had taken after the conversation was brought up with him to see through emotional intelligence and cognitive behavior what this was, being aware, and to essentially bring awareness and clarity to her. Claire retreated from him, literally began to avoid him, would hold her ground, and not let him move in with her before marriage, the reason being that there was not enough room for two people in her flat in the city and they were not married. This, in turn, made him upset as he made it clear he wanted to move forward into the relationship and consequently move to the country/suburbs and start a family with her, which she did not want to do with making her unhappy.

We moved on traveling abroad with her partner and I asked her what the reason was for such a low number, she said that her partner was not very adaptable to change or times, different countries or languages, instead of having fun together and exploring the different cultures, etc he continuously looked at the differences of ‘back home and how much better it was than (food/climate/people). More so, when they traveled abroad on business/leisure they would share a room, he wanted to follow the same schedule together from morning to evening to be with her. I asked how that made her feel, what emotions came up, the anger she replied as he was holding her back towards learning about different parts of the world, she felt suffocated, unhappy, and wanted the flexibility in sharing things and individually ie going for a jog on her own. What would make you happy in this situation I asked? She said she simply stopped asking him to join her on business trips or holidays instead went with family or friends. She felt happier and no longer felt suffocated or pulled back by her actions or words towards him or with him.

Once we had narrowed down the areas of her life where these feelings of unhappiness were stemming from she knew she had to physically and emotionally detach herself from him, starting with the literal sense.  Throughout several sessions and later conversations with her partner that the relationship with him was not bringing her happiness, examples were brought out and the reframing of perspectives kicked in towards replacing her unhappiness with happiness. He was not willing to change or be flexible in any shape or form by embracing her lifestyle or choices or her to his. Choosing to move in together with her before marriage was not on the cards, moving to the suburbs in a house (not in the city) with her cutting back on travel and staying at home as his wife/ mother of their children was not shared either.  The clarity was put into place and she was angry and upset towards herself for not noticing this sooner. She found where this unhappiness was stemming from and the relationship ended shortly.

We then moved on to being detached from a relationship and him moving forwards and what steps would be taken. Ironically, she started to look for larger apartments shortly after and remembered that she found the perfect apartment just 100mts away from her current apartment in another building in her neighborhood which she had initially seen years ago. Happiness was creeping into her life and she realized that she always wanted a larger place to live in, but subconsciously held back as her boyfriend wanted to move forward in all areas of her life (marriage, having children, essentially losing her identity as an independent businesswoman). Having a smaller apartment gave her the comfort and security that there was no room for him to move into her life. Travelling resumed yet this time she chose to coincide business trips with fun holidays with friends, complete freedom on having her room, timings, sights to see,  and scheduling business meetings she did began to feel she could breathe better.

To conclude our sessions: We reverted to the wheel of life and asked the same question on the same topics, yet perspective had changed hence the future perspective of a relationship had been reframed,  the results were all above 8. Also, I completely agree with how the ICA stated ‘Reframing is an essential part of the coaching process as it helps others to see things differently and, as a result, come to different, more empowering conclusions or feelings about the event or experience’.