OM (written universally as ॐ; in Devanagari as ओं oṃ [õː], औं AUM [ə̃ũ], or ‘ओ३म्’ om [õːm]) is a mystical Sanskrit sound of Hindu origin (India), sacred and important in various Dharmic religions such as Sanātana Dharma or Hinduism, Buddhism and Jainism.

Nowhere in the world can we meet with a more sacred universal symbol that has got such a vast amount of significance. Of all the mantras, the most powerful and the significant one is the single-syllabled incantation called the Pranava. This is the AUM (also pronounced as OM).

From Vedic times until the present day the word AUM ‘OM’ has been taken as a symbol and as an aid to meditation by spiritual aspirants,  the Logos, thereby connecting man and God.

AUM represents the Self which is the Supreme Nondual Reality

The letters A, U and M symbolise respectively speech ( vak ), the mind ( manas ) and the breath of life ( prana ), while the entire symbol stands for the living spirit, which is but a portion of the divine spirit.

The three letters also represent the dimensions of length, breadth and depth, while the entire symbol stands for the perfect man ( a sthita-prajna ), one whose wisdom is firmly established in the divine.

The sound A represents the waking state; In coaching it can be related to what the client wants to really Achieve, i.e. the Goal.

The sound U represents the dream state; In coaching it can be related to the current state of reality and Unleashing the options the client has.

The sound M represents the deep sleep state; In coaching , this can be related to the client clearly articulating their action plan and commitment to Move forward . 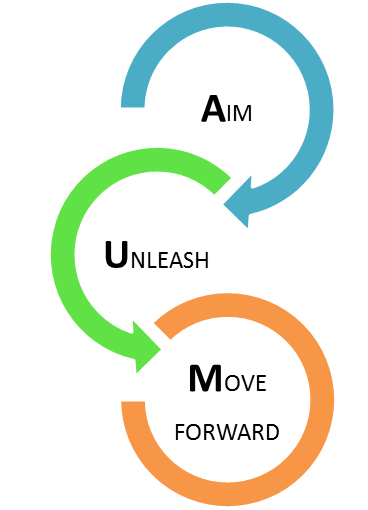 The Coach can do this by asking the following questions …

During this stage, the Coach communicates effectively with the client in order to unleash the current reality.  The Coach helps the Coachee to assess their present situation by asking powerful questions, few of which are –