Have you ever been on a roller coaster? Well, in that case you might be familiar with the excitement that come with this experience. And you might be familiar with that sensation when you walk towards the cars, while your shoulders tense up and a strange knot settles in your stomach. With some anxiety you sit down, you buckle up and off you go! Up the hill, to the top, and down while you’re screaming and laughing at the same time. “What on earth am I doing, where is this taking me… Someone please pleeeaaase get me out of here!”, might be some of the few random thoughts that go through your mind.

A coaching process may not have the same speed as a roller coaster, but its structure shows a striking similarity.

Coaching is not a static process. It is a continuously moving journey in which the client goes through a whole range of emotions and learning. It is like rolling cycles in which the client experiences different fases of development, the same way the roller coaster goes up and down. I’ve put these cycles into a model, which I’ve called SPRINT. 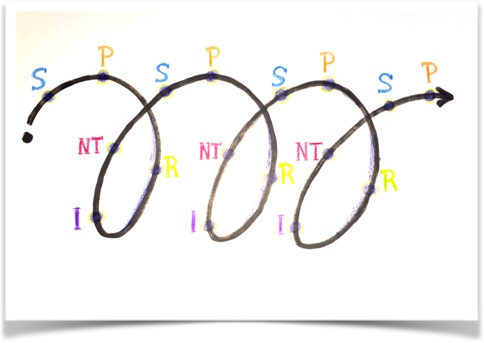 In Cross Cultural coaching and Transformational coaching (my niches) I have seen many examples where this model approach has worked. Normally, my clients engage in a three months coaching programme which consists of seven coaching sessions.

During the coaching programme, clients tend to go through a process that starts with Self awareness in the first sessions. In the following sessions they can experience an initial ‘high’ in which phase they make Progress. And after this happens they often go down the slope of the roller coaster track and find themselves in a void. This is the Resistance fase where energy is low and the client is reassessing his coaching experience. It is a natural reaction on the learning that has taken place and in the next phase the client will gain new Insights about where he is at in the coaching process. The new insights will push him further up along the coaching path and soon he will experience that he is on New Tracks, that will bring him further towards his eventual goals.

More details about the SPRINT phases:

In this phase of the coaching program, the client has just started his or her journey and is observing his current behaviour. Slowly client will recognise certain patterns and he will become more aware of his current situation. He starts to recognise what is missing for example or what it is that he needs to put in place in order to progress.

After the initial Self awareness phase, client leaps forward in the coaching program. He is very enthusiastic, eager to learn and tries his utmost to practice new learning. If he has got any ‘homework’ or exercises, he wholeheartedly takes them on. He enjoys the coaching, feels confident and is willing to challenge himself in the practices.

In reaction to the new learning and initial progress that has happened, the client most likely will experience a setback, a (normally) temporary dip in the coaching process. His energy is down, there is a certain lack of interest and fear to go outside his comfort zone. He’s clinging on to the present situation and is questioning the purpose of the coaching practices. He’s basically standing still to reassess his situation. In general, reasons for resistance could be:

This is the phase where client and coach can find out what is really in the way for client in order to  progress and to reach his goals. There are many ways to accomplish this together with the client, for example by asking him powerful questions or use other techniques to get him moving again. It is in this phase where most learning occurs.

In this phase client will find new ways to deal with his situation, with a stronger focus on his goals. Rather than progressing like in the first cycle though, the New Tracks take the client further and perhaps in a different direction, but still towards his goals.

Mostly a coaching program takes around three or four months in which three cycles can take place. The model that I’ve described above though is just an idea what in general can happen for clients. There will always be clients who experience not all phases in the same way as other clients do. Perhaps some people might only need two cycles to get were they want to be. Others might need four or five cycles in order to get to their goals. The SPRINT model is flexible; its cycles might be big or small and depend on the experience of the client.