The “Seed of Life” is formed from seven circles being placed with sixfold symmetry, forming a pattern of circles and lenses, which act as a basic component of the Flower of Life’s design. (by Wikipedia)

The seed of life describes the pattern of the 7 days of Creation. 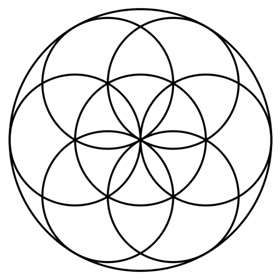 Coaching is a journey such as the creation and the establishment.

The seed of Coaching describes this entire journey, from the moment of conception of someone’s idea to the contact with a Coach up to the achievement and celebration of one’s goal.  That could be someone like an individual, a business or an organization who could need corporate coaching, small business coaching, personal coaching or career coaching.

Start, Action, End, are all characterized by consciousness.

Consciousness is everywhere, at all times, in all ages. It appears in relationships, collaborations, agencies. Wherever human factor exists there is consciousness, too.

In this step the recognition of consciousness and its role are performed.

The development and growth of personal consciousness is based on seven crucial stages which are classified in a certain order. Survival is the first stage or focal point of consciousness and is related to feeling secure and safe in the world. On the other hand it is unhealthy to refer to anxiety derived from feelings of not being safe or secure or not having enough. Following this stage, come relationships which provide a framework of love and a sense of belonging. The third stage is self-esteem which creates a sense of personal self-worth whereas it is not healthy to mention lack of respect about oneself. Transformation is the fourth stage in which one profoundly realizes one’s existence by uncovering the authentic self and trying to harmonize one’s ego with one’s soul. The fifth stage is internal cohesion which emerges as soon as one finds the true meaning in one’s life especially when this is aligned with passion or purpose and when a vision for the future is created.

Making a difference is the sixth stage in which the aforementioned sense of purpose is actualized through co-operation with other people in order to achieve mutual objectives in terms of benefit and fulfillment. The last stage is service mainly self –less service, which usually comes along the pursuit of one’s passion and vision in life. 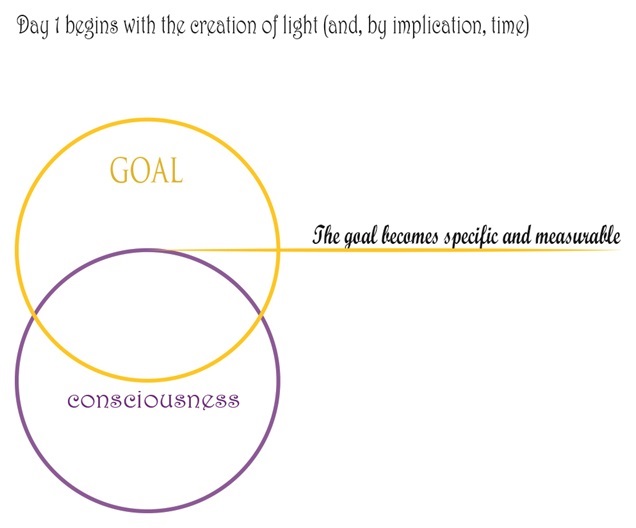 By recognizing the seven levels of consciousness the goal setting appears. The goal becomes specific and measurable. Through specification and measurement, the coachee has the ability to see himself to his target. Thus, visualization has been accomplished. Open questions can give image and identification of where the coachee is now in relation to his goal. As seen in the figure, there are goal-related conscious actions for which decisions have been made after the identification of the NOW.

We keep the link with conscious choices and always check and remain in the NOW. Emotions are the same either in our personal or professional space. They are there to guide us accordingly. Emotions enable us to understand whether the action will succeed or not.

The emotions vary according on our perspective.

If you wake up in the morning and wear pink glasses you will see everything in pink. This is an example in case someone wakes up with a feeling.

It is important to notice through the shape that emotions intersect with Now and Action.

We are interested in emotions before and after action, yet always at the appropriate moment.

Emotions make us understand whether the action will succeed or not. If it is something one wants to do or not; if one has doubts or not.

After action, emotions are also very important. Feelings of confidence are displayed as confidence, faith in themselves, love their steps and gratitude of the journey. The Acknowledgement of the Coach and coachee himself produces positive reinforcement.

Noticing the model again, acknowledgement is a link with the actions, emotions, the goal and the seven levels of consciousness. Besides, by observing the model, the achievement is conscious, is NOW and there is acknowledgement together with the appropriate emotions.