My chosen model is C.O.U.R.A.G.E. It is about courage for Women who wish to transition from where they are to where they want to be, empowered to ‘jump’, and no longer paralyzed by fear.

It’s been noted that many women are missing in leadership roles and that about 14.16% of them hold executive positions in fortune 500 companies, and this has remained the same for a few years now.

Having worked in a corporate setting for many years, I have been impacted by, witnessed, and recognize the barriers that keep women from advancing in their careers or achieving their business aspirations.  These barriers are in the form of an invisible ceiling among which are unconscious gender bias, stereotypes, and lack of access to an informal network of power and influence.  The “old boy network” is very much alive.  These barriers keep women moving in circles and many times lead them to develop inner glass ceilings which may manifest as self-limiting beliefs, fear, lack of confidence, and feeling of inadequacy, to name a few. 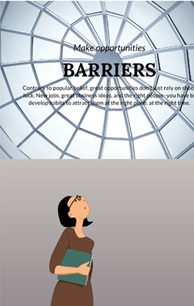 These inner glass ceilings are even more dangerous because they show that they have bought into the indoctrination that women are not strong and capable leaders. Their ability to self-advocate or network is neutralized by the lack of self-confidence, the feeling of inadequacy, and fear.

Many well-qualified women find themselves working in jobs or positions that they know they are overqualified for, but because some jobs, especially top decision-making jobs are believed to be slated for men, women do not feel empowered to apply for them.  Some of the women think sacrificially as well.  “I just want a means to put food on the table,” they say, and decide that they would not ‘rock the boat’.

When it comes to negotiating salaries, many women negotiate for lower salaries, only to find out that their male counterparts, doing similar jobs, are paid higher.  Even after they find out, some say to themselves, “it does not matter.  The difference is not much.”These same women, when they are in the comfort of their homes, complain about how unfair the situation at work is, and sometimes feel like quitting.

Many of us want the glass ceiling to shatter, but do not have the courage to pick up the hammer, let alone strike at the ceiling.  We simply mind our Ps and Qs and hope that someone else would be the courageous one.  Sometimes, women even sabotage one another.  They are more comfortable working under a male boss than a female one.  “Who does she think, she is?” we silently ask, about our female executive.  All these keep the glass ceiling opaque and thick. 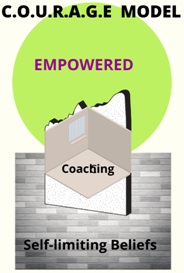 My model is C.O.U.R.A.G.E. It details steps in helping women discover the courage to navigate the external and internal glass ceilings to living up to their full potential.  Merriam Webster’s dictionary defines courage as: “mental or moral strength to venture, persevere, and withstand danger, fear, or difficulty.”

Courage is not easy to come by.  To me, it is feeling the fear, but doing it anyway, or as Erica Jong put it: “I have not ceased being fearful, but I have ceased to let fear control me.”

One perception that people have about women leaders is that they lack courage. I don’t really agree with this perception.  What women or anyone facing a challenge need are the support that would help bring out the courage within them.

Many women have been so indoctrinated that the inner glass ceilings they develop block their ability to show the courage within them. To know whether women are courageous, one needs to put them in a position where they must fight for their loved ones.  Those moments are when their courage springs to action.  The challenge is that women find it difficult to show courage for themselves.  This is where coaching is needed and proves helpful.

When clients come to me with the stories of what they are going through in their lives, which sometimes is their attempt to justify their being stuck, I as their coach, would challenge them to discover what is really going on, without digging too much into the story, nor taking them back into the past. This helps to make them aware of what their real issue might be.  With this awareness, they can move on to the next step.

Through powerful questions, the coach can help the client to be open to the new paradigm, or to reframe their perspective.  Some of the questions could be:

Coaching can then empower them to be unwavering.  Some of them have dreams that they feel are unattainable because, after all, “I am only a woman”.  With the coach’s support the client can acknowledge the fear, but do what they must, anyway.  According to Ernest Hemingway, “Courage is grace under pressure.”

Holding space for a client is very critical.  The coach’s presence reassures the client, helping them to reach for their dream, and be resolute while pursuing it.  These are moments when a feeling of inadequacy sets in, as the client reaches inward to clutch unto their inner glass ceiling.  With a coach listening actively and acknowledging the client, the client can keep their focus, and walk the path they must.

The aim is to make sure that they have a way to keep themselves accountable.  People tend to outsource accountability to others, like their partners.  The coach would need to find out how the client plans to keep herself accountable so that any additional support would simply be a bonus.

The coach proceeds then to ask the client questions to ensure that the commitment they made is a solid one. Sometimes we tell people what we think they want to hear.  The coach needs to find a way to support the client’s action plan, by finding out what could get in the way.

Encouragement would take the form of finding out how the client plans to use their learning from this process to help them stay grounded. It is also the moment when the coach once more, acknowledges the hard work that the client has done, reflecting the gratitude often shown by clients back to them, to let them know that they are the ones who did the hard work and that they have what it takes.  The client at this point would feel energized and empowered.

Courage is not easy to come by, but it is certainly attainable.  Showing courage despite the fear can lead women or anyone facing the inner glass ceiling to overcome and pursue their dreams. The coach, using the C.O.U.R.A.G.E. model can hold space for the client, encourage her to access the courage that she has within to help her overcome the external and internal barriers which prevent growth or advancement. This in turn will help the client to feel energized and empowered.

Marcus, Bonnie, “Working with a Coach Helps Ambitious Women Get Ahead, https://www.forbes.com/sites/bonniemarcus/2015/05/04/working-with-a-coach-helps-ambitious-women-get-ahead/?sh=790399a11c4a