Empowerment is the process by which an individual or group conveys to others the authority to act. Although empowerment finds meaningful application in politics, economics, and social relations, it is most highly valued as a spiritual transaction that both invokes and responds to the divine presence as mediated through human interaction. To be specific, empowerment ethics means the norms, principles, and ethos ascribed to individuals and groups engaged in the task of liberating others by empowering them to act (Cheryl Sanders, “Ministry at the Margins”).

Dr. Cheryl is a friend and colleague, a professor at Howard University School of Theology and a specialist in Ethics. Her work on issues of social justice and empowerment deeply informed the development of my coaching model. Empowerment is that bridge between management and staff, between the CEO and the custodian, allowing them to envision a future together – or, as Peter Senge said,

There is nothing as powerful as a shared vision.

As I began the process of coaching certification through the International Coaching Academy (ICA), I was focused on organizational culture and consulting to build healthy organizations. Cheryl helped me to go deeper and wonder about the individual, the employee within the organization and how that individual understands their value, hears their voice and contributes to the collective vision of the corporation. So three years ago when I began at ICA, I was working on a model of organization for not-for-profit organizations that was centered on the principle of empowerment—the stewardship of human resources.

The earlier model that I developed viewed the organization in non-hierarchical terms, assuming that organizations could be healthy communities of people, tied together by the cultural norms, values, beliefs, and mission of the organization. This community perspective was essential for my work then and for my coaching work now.

Why Value, Voice and Vision

I love stories so the following, short narrative account begins to show how I see people and why I developed a model that chooses love and empowerment – that draws out the self-worth (value), the self-affirming (voice) and the forward moving (vision) of individuals and small groups. It is a story of a mission worker who exemplifies the initiative, strength, and love that is needed in all places, not just the workplace. Through her story, she makes a loud statement about the positive ways to bring peace to the workplace. The story is told by David Whyte in “The Heart Aroused”.

Some years ago, I experienced a weekend in England among the Medical Missionary Sisters. The weekend was part of a six-week rest and recuperation for the sisters who had returned exhausted from their work in Peru, Indonesia, and India where they delivered babies, inoculated children, and cared for the old and sick. They had absolutely no way of replenishing themselves.

Down in the kitchen of the convent all the while, like Cinderella among the ashes, hidden away, was the woman who served our meals every day. I was amazed, not only by her youthfulness, but by the glowing spirit of calmness and serenity she had about her work. She seemed like a bright, shining light in the dim underground dining hall, and she never had a bad word for anything or anyone. It turned out that she had been a member of the Poor Clare order for over twenty years. The Poor Clares are a silent, prayerful order with an almost Zen-like approach to spirituality, spending much of their time in silent contemplation. She had entered the order at eighteen and spent more than two decades in contemplation; even the work of the convent was done by the sisters all working in mutual silence. Finally after years alone in her cell, she had heard an inner voice telling her to go out and work on the behalf of others.

The whole experience was something of a culture shock for her, but she had not a bad thing to say about her new order, though its whole approach was foreign to her training. Witnessing her profound spiritual presence, I couldn’t help but think that here was a woman who would never burn out no matter how much she applied herself to the outer world. She had an inexhaustible inner light that would endure through the direst of circumstances. She had come to that light through the ability to say “no” to everything except that thing most precious to her, an inner focus based on her spirituality and the life to which she had given herself. Out of years of saying “no”, blossomed a magnificent “yes”—a “yes” that could be followed fully because after all those years gathering her psyche into a single body of faith, every part of her would be uttering it.  “Yes!”

Though the other sisters were saving lives every day, the overwhelming feeling was that they were doing this work because there was something wrong with the world that needed to be put right, whereas this youthful hidden saint was doing it because everything was right about the world and she wanted others to experience it that way too. Her faith and her own “no” took her to the farthest end of aloneness and then led her back into a human community.

David Whyte told this story to illustrate his conclusion that the same internal imperatives found in this “religious” work are found in each of us no matter what our work environment. Whyte thinks that our soul and our personal destiny are equally at stake whether we are articulating our life in the cloister or in the corporation. He sees that we have the choice to look at the pressures of life in a pathological sense, stressful without sense or sensibility, or we can see our environment as a crucible, where we are refined and where we can cultivate an inner life. Our voices are powerful reflections of our inner lives and strong indicators of how we value our current circumstances. In the workplace, we can experience the reality of a business operation that affirms, encourages, and builds people up to reach their full potential.

Max DePree’s, in his book on “Leading without Power” term “realized potential”. This term became the key, the inspiration, for me in developing this coaching model. As I reflected and considered the richness of what Max had been saying over the years, I wrote my own personal mission statement saying that I will “with all possible integrity, justice, and love, invest in the lives of people, drawing them toward the fullness of their God-given potential.” My power tool – Limiting Beliefs vs Emerging Potential – grew out of Max’s term “realized potential” and helped me draw from deeper places. The final “cap” for the model came during my supervised coaching sessions, with Sunita and Alexandra, and during deep coach training with Leon.

I am grateful to all who invested in me!

The Three Vs – advancing personal value (a sense of self-worth) is key to helping people see their emerging potential and envision what their future might hold. Personal power is strengthened by our inner capacity to reflect and our outer capacity to move forward with purpose. V3 Coaching establishes a platform of grace and gratitude that supports the inner conversations, creates and holds a safe place for reflection and shows honor to those who will come in.

Being welcomed into a human community at birth gives us all a beginning of intrinsic value. Over the years, our understanding develops – of how the world works – our family culture and the wider culture around us. The many things we learn come in a variety of packages, some even as limiting beliefs that are barriers – such as fears, the need for security, our sense of self-worth, know our value, then we have a voice, a significance, and find that we can dare to dream. Coaching helps to re-establish value, break through the stronghold of limiting beliefs and false statements. Starting with self-worth and value builds a strong foundation for success and amazing growth potential.

Whether we are speaking, singing, giving an opinion, expressing love or other emotions, our declaration­­s through voice are powerful reflections of our inner self. It is common to have someone in coaching who is voiceless, not able to fully express themselves or maybe doesn’t even know their voice. There are many who are “stuck” and can’t move forward without connecting with their inner self, their inner voice. Deep reflection is a difficult process and the powerful questions that coaches ask can help someone who is stuck move toward hope, toward purpose and claim their value through the expression of voice.

A vision, a dream, an idea, or an imagination is such a beautiful, power thing. The transforming process takes someone from inner reflection and finding self-worth, to finding their voice and moving into a place where they might begin to dream. One of the most beautiful ways to explain this type of transformation is to tell the extraordinary story of the “Imaginal Cells” – how a caterpillar changes into a butterfly.

After a caterpillar buries itself inside its cocoon, it waits to morph into a butterfly. The caterpillar does not simply shrink a bit and sprout wings. Instead, it sort of disintegrates into a puddle of ooze within the cocoon. If we were to open the cocoon halfway through the process, we would not find a half-caterpillar half-butterfly type creature, but a blob of primordial goop. Basically a mass of death and decay. The goop is made up of a bunch of individual cells that are all basically the same type of oozy cells.

Do they hold the same memories, life lessons, and consciousness?  Who knows?  One would think that for survival of the species, the butterfly would still retain whatever knowledge the caterpillar had learned before entering into the cocoon state.

If the imaginal cell can be a quiet little thought somewhere in the back corner of someone’s mind telling them that they could make huge change in themselves to become less like the caterpillar and more like the butterfly. Many people have done it before through the coaching process.

People know that they are meant to grow, morph, and change into some new and improved version of themselves by the reoccurring theme of those tiny little imaginal cells creating inspirational thoughts. They find that deep “value” – the hidden, intrinsic worth – in the reoccurring thoughts that can both haunt and inspire. They will cluster together creating themes of healing change, themes of growth, and themes of becoming something completely different.  As the butterfly – the self – emerges, the voice strengthens. Helping someone find their emerging potential and see – envision – themselves as the fully developed butterfly is a truly awe inspiring process and a privilege to be a part of as a coach.

My Types of Coaching – usually a blend for each client 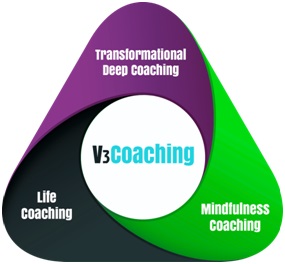 Using the tools of deep listening, practicing silence, metaphor, reframing and holding a safe place for love and light to enter in – two features:

My Standards of Practice

The code of ethics is divided into statements about coaching in general, conflicts of interest, professional conduct with clients, and confidentiality/privacy. The details in each category are important and given, therefore, to each potential client, as well as posted on the V3 Coaching website.