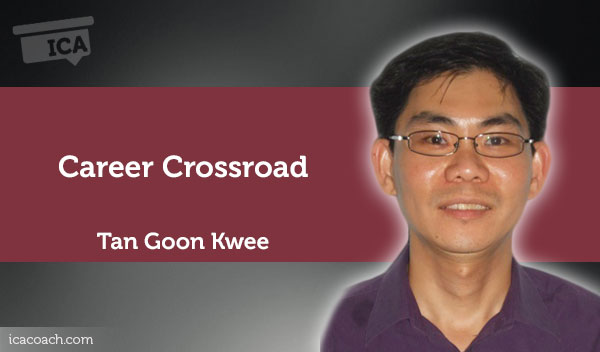 Jason had been working in Engineering Sector for the last 15 years. 6 months ago, he left his engineering profession and switch to education sector becoming a lecturer teaching Engineering in an education institute.

After 6 months of teaching, Jason felt demotivated and wondered did he make the right choice leaving his Engineering job.  He approached me asking if we could have a few sessions to review his current situation and help him to decide what he should do next.

Before I began with the coaching, I briefed him on what coaching is and explained how it defers from consultation, therapy mentoring. I shared that being his coach, I am his accountability partner but he had to make his own choices and decisions. I also informed him that may be occasions that we might talk about heavy or sensitive issues. I would need him to highlight if he feel uncomfortable to talk about it. I gave him the assurance that our conversations will be kept confidential.

H acknowledged that he had understood the commitment by the coach and client. With that understanding, we began our sessions.

Jason felt confused in his current situation. He left his previous job with the aim to have a slower working pace and to get enough rest. However after 6 months of teaching, he felt more drained and tired than before. He was unhappy and his morale was low. Was his current mood a result of environmental change or was it due to job mismatch? Should he carrying on Teaching or return to his previous Engineering job? These were the questions that were bothering him.

From conversation, I realised that Jason was a very diligent individual. He always gave his best in every task that was assigned to him and always aimed to finish them ahead of time. He would put in extra hours beyond the office hours to complete them. Unfortunately by doing so it takes up too much of his personal time, thus contradicted his intent of slowing down.

He was also a reserved person who would rather remain silent rather than going around initiating conversation. When coming across a problem, he would keep try on his own before asking for help. This created a lot of unnecessary stress and anxiety, especially when the task given was unclear.

Throughout our sessions, several skills and approaches were used. They are as follows:

I started by inviting Jason to visualize what a typical working day would be like 3 years in the future if he had the ability to control his life. He gave a description of how he envisaged a typical working day would be like. Through this exercise, he came to realization that he seek to have freedom and want to used his personal time for his personal activities. These become the two key attributes of the job that would energize and motivate him.

Next, I asked him to list the career options that were currently available to him. He identified two options; remain in teaching or returning to engineering. We worked together to list down the pros & cons for each career options. From the list, we noticed that he had more pros for Engineering than Teaching. The number of pros and cons for Teaching were the same, while there were more pros for Engineering than cons. Through this exercise, it clearly showed that he still had a strong passion in Engineering and he disliked secondary responsibilities, such as strategic planning, business development activities, recruitment, etc.

This exercise also helped us to discover that he valued knowledge sharing, helping others and family time. Based the values and the two key job attributes, I asked him to look at the career choices available to him and which career would be a better fit. After a long pause, he came with the idea of doing both on part time basis, Engineering as the main role and teaching as secondary. Focusing on this approach, I asked him to develop an action plan to make his vision come true.

Jason came back with a 6-month plan. He planned was to become an Engineering consultant for his previous company and switching his teaching to part time job. He planned to spend 70% of his time on Engineering consultancy while the remaining 30% on teaching. He had developed a series of steps to engage his previous company, convey his intent of becoming a consultant and establishing the agreement with the company. Once the agreement is in place, he would approach his school requesting to switch to part time teaching. He also included steps to communicate his intent to his family, friends, peers and potential stakeholders. His plan looked fine except that he did not spell out the expected income from both career. I asked him to include the income target into his action plan.  Another aspect that was not stated in the plan was what if the plan did not turn out according to plan what would he do next. This would be an area for him to enhance for his plan.

Active listening has been very powerful technique. It helped me to identify patterns and values which Jason treasured a lot. With that, I was able to pick up the high tone and “ah ha” moments. Those were the indications of Jason’s motivations and passions.

At the end of the sessions, Jason confirmed that we had met his objective. He had a better awareness of his values and career goals. He had created an action plan that can help him to achieve his vision. It would be for him to execute the plan and plan for the contingencies in case the plan did not turn out as intended. He sounded more energetic at the end compared to his first session. It was clear that he had discovered his career aspiration. He did expressed a little concern whether his vision truly fits him. He worried that he may be still unhappy after achieving that his goals? To address his concern, I invited him to do an assessment to determine his motivators. This was to check whether his goals and his motivators were aligned. He accepted this invitation and would be incorporating this into his action plan.