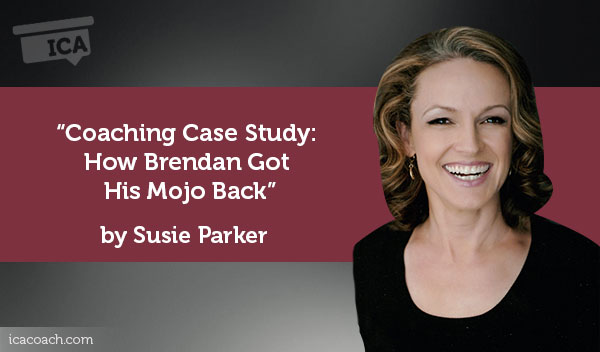 Brendan had lost his mojo. Stuck in a job he hated and feeling unfulfilled in his life in general, he came to coaching to find a mechanism that would help him rediscover his passion.

This case study demonstrates how effective and empowering coaching is simply by building rapport and creating a safe, judgement-free environment – as long as the client comes with the commitment to do the work.

Brendan is single, in his late 30s and, when we first met, was a pricing team leader for a pharmaceutical wholesaler. He has a BA in Psychology & Computer Programming and another degree in Photography. He is a smart, creative, educated and charming man. He is honest and open and committed to getting his life back on track. To all intents and purposes, he is the perfect client.

Prior to our discovery session, I asked Brendan to fill in a short questionnaire to help me get to know him better. The questions and his answers are listed below:

Q: What do you hope to achieve from coaching?

A: To be happier with my life and with myself.

Q: What are you passionate about?

Q: What brings you satisfaction?

A: Creating something beautiful; solving a problem with a creative solution; crafts.

Q: What is your dream?

A: To be a fashion/art photographer; to live off my art; to have a job that allows me to be mobile, not office bound; NOT in a corporate structure, like a sales rep.

Q: What resources do you have?

Q: What will you do once you achieve your dreams/goals?

When we eventually spoke, he explained that his dream of living off his art was tempered by concerns over not having enough money to live on. He is currently living with his parents so that he can save and buy his own place.

He was miserable in his current job. A natural leader, Brendan had completed a leadership course paid for by his company but, due to structural problems and the company’s unwillingness to embrace change, Brendan was unable to employ his newly honed leadership skills. He felt stifled and undervalued.

It became clear that while his ultimate goal was to live off his art, the reality was that he needed to earn money. The interim goal, therefore, was to find a new job which allowed Brendan to work creatively in a leadership/training role.

The discovery session went well. There was instant rapport and connection, so we planned our first coaching session.

With the goal set during our discovery session, we used this session to look at what options were available to him.

When asked to describe his perfect job, Brendan talked with enthusiasm about being involved in public arts and events from a creative perspective, an artistic director for major events. However, I sensed some unease and inquired as to what this might be.

He explained that his parents weren’t risk takers and he had inherited this trait. I asked him to think of a time in his life when he had taken a risk and was blown away when he recounted the story of how he’d given up a previous safe and lucrative corporate job with Sony to undertake a degree in photography. I think we were both a little taken aback by this revelation. By challenging his underlying belief that he wasn’t a risk taker, Brendan revealed himself to be anything but. I asked him to imagine himself at 90 and asked what advice he’d give himself now. He said: “just leap and do it!”

With this newly reframed perspective, the actions for this week were: research other companies that might suit him better, ie, arts based companies and also put some time aside to do something creative.

I wasn’t expecting what happened next.

Brendan resigned from his job the day of our second session. He said he’d “exploded” and handed in his notice on the spur of the moment. Suddenly, the job search was now more urgent.

For this session, I suggested a values and life purpose exercise to help him define exactly what it was he was looking for.

Below is a list of the questions asked and a summary of what we discovered:

Q: What is unique about you?

Q: If you are an invisible presence, eavesdropping while some of your greatest admirers talk about you, what do you hear?

Q: What skill or task do you perform so easily that you don’t need to think about it?

Q: What do you enjoy most about your non-work life?

Q: What secret dreams do you have about things you would really love to do or try?

Q: What unrealised goals are there for you?

Q: What themes or threads run through your life?

Q: What do you want to leave behind you as a legacy in your current job? And in your life?

(Questions taken from Coaching Skills: A Handbook by Jenny Rogers)

What came out loud and clear was that Brendan is a natural leader and gifted trainer with a love of people. He is fiercely loyal, doesn’t conform, has the ability to look at things from different perspectives and is passionate about team building. The exercise also brought up how important creativity and, in particular, photography is to him.

When asked how he felt after this exercise, he said: “I need to be a trainer!” He noticed that he’d been using more powerful language than he would normally instead of starting sentences with “I think …”.

Even though no actions were set this week, I felt I was seeing a different, more empowered person in Brendan than I had in previous sessions.

After the values and life purpose exercise we’d done the previous week, Brendan was feeling more confident about who he was and what he did best. In the week since our last session he’d come to realise that he needed to be a trainer and that he should be looking for a job as a customer services manager. He also knew he needed to pursue his passion for photography. Suddenly, there were specific goals in sight and I could hear the enthusiasm in his voice.

We devoted a good amount of the session brainstorming what would make his resume stand out in a sea of other resumes and the actions that emerged were:

As promised Brendan had worked on what turned out to be more of a personal value statement:

“Brendan is someone that would be chosen, if the choice was given. Not merely a son, brother or manager. Grateful everyday for the gifts he has in life and courageous enough to seek the changes he desires, calmly and confidently. Memorable for breaking the conventions, the boring, the mundane and for creatively seeking to make new connections. He is committed never to stop learning”.

Given that the job search was now underway, Brendan wanted to use this session to work on his creative side. He revealed that his dream was to reconnect with a project he’d been sitting on for seven years. When I asked what was stopping him, he said time and energy but also a little voice that told him he wasn’t good enough. Based on this new information, we dug around a little to see if there was any evidence that proved he wasn’t good enough. There was none. We then worked on creating structures that would encourage him get his camera out and get started.

Actions for this week were:

Brendan, as always, was as good as his word and had found a friend to hold him accountable and had also spent 3 hours working on a photographic project.

Wanting to make good use of his new-found freedom, Brendan was keen to push himself out of his comfort zone. He talked about wanting to work with other photographers to get more experience and he wanted to start taking the photos, which would form part of the project he’d had on the go for the last seven years.

Actions for this week were:

The big news this week was that he’d just had an interview for a customer services manager job in a company he rated highly. He had had other interviews before but this was the first time I’d heard such enthusiasm.

Since our last session, Brendan had had a couple of breakthroughs:

He felt he hadn’t done much since we’d last spoken. He had started contacting photographers he’d like to work but didn’t seem to have got very far. He said he was cranky with himself and felt anxious about not having found a job yet. We talked about what support he would need to keep himself in action. During the course of our conversation, Brendan decided he needed to create a list of “bite-sized” intentions that would feel more achievable. He also mentioned that our sessions were a marker in the week for him and giving me a weekly progress report helped hold him accountable. With this in mind, the actions he decided on this week were fewer and more do-able:

Brendan got the job. He was made an offer just hours before this session and he was over the moon.  He was on a high and, as a result, we did a lot of acknowledging and celebrating and not a lot of coaching.

Prior to today however, he had sent me some of his product photos which was exciting to see.

There were no actions.

It was a different Brendan that showed up today. Calm and confident, he explained how he had a strong sense of self-belief now. He felt he had started building something for himself.

He loved his new job; he’d starting updating his photographic website portfolio; he’d already recruited 5 potential models to photograph; he’d come to the conclusion that he doesn’t need another photographer to work with; he was even thinking of setting up a product photography business.

Looking back at the first question I’d asked him prior to our discovery session:

Q: What do you hope to achieve from coaching?

A: To be happier with my life and myself.

Brendan actually said: “I’ve got my mojo back”.

This case study covers the first 8 sessions because it tells a story; it has a beginning, middle and end. Brendan has decided to continue the coaching process however because that’s exactly what it is, a process.  He says he likes having someone to check in with, someone who will hold him accountable and keep him on track.

It has been thrilling to observe someone take control of his life and I feel honoured to have been able to support Brendan on his journey.

As for me, I’ve learned a lot. I’ve learned not only how valuable creating a judgement-free environment is for the client, but also for myself. Eliminating judgement from my day-to-day life has freed up space in my head, which in turn makes me feel lighter.

I’ve learned how powerful it is to have someone listen to you objectively for an hour. We don’t listen to each other anymore. Screens rule our lives. We communicate via social media. To have someone actively listen to you, mirror back your thoughts and words and not hijack the conversation with their own stories is almost as valuable as the coaching itself.

As coaches I believe we are inspired by our clients to take action in our own lives. Brendan as certainly been an inspiration to me and I am eternally grateful to him.