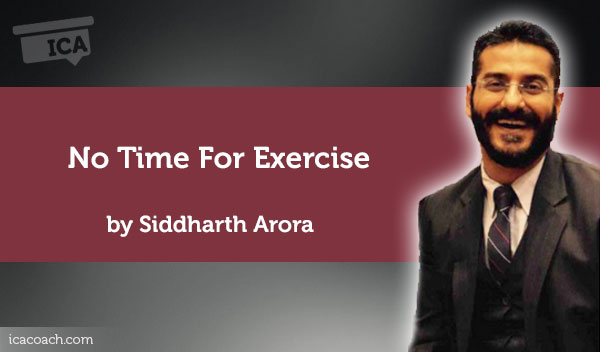 Vikram, is a senior management consultant in a global consultancy company. He is a 41 year old man, married with 2 small kids.

The stated problem was that Vikram had been neglecting his health in terms procrastinating on having an exercise schedule, starting and adhering to it as he felt he had no time for it due to late office hours.

Vikram had been deliberating about it for over a year now and strongly felt the need to do something and not spend his entire time working long hours at work and balance time in his house-hold duties. Over the past year or so, he had tried going to the gym but that did not work out. During this time he had put on significant amount of weight and felt unhealthy.

I used specific coaching skills such as ‘active listening’ and ‘questioning’ on the motivation and importance of a healthy lifestyle for him. I checked on what was important for him? We explored on what all he had tried and discussed on what more he can try, using some visualisation on what physical activities interested him as a kid. I also worked with the client in putting in place a ‘structure’ to support him in achieving his goal and helped him create an ‘action plan’ around it.

3. Explain your process in detail?

To begin with I started by understanding the issue at hand and the motivation behind the goal by asking for details:

Next, I got the client to speak about his goal and stayed with the client:

Next, I started to understand what all he has tried and the possible barriers:

Next, I started exploring what structures can be put in place to make it easier to achieve the goal:

Finally, we explored ways to remain accountable to the goals:

While the client had a good understanding on being healthy and the need for physical activity, the reason for procrastination was not time management related as was shared but doing something that the client is interested and motivated to do.

On the question on “what have you tried”, Vikram mentioned that he tried going to the gym as his other office colleagues, but that did not work out. On my asking, what according to him the barriers were, he mentioned that the gym used to close down by the time he finished office and also that he did not enjoy it. I asked him on what gave him enjoyment as a kid and he mentioned that he enjoyed trekking and going for long walks near the lake. I asked him how he felt when he did long walks near the lake and I could feel the happiness and energy in his voice when we described this.

We explored what else besides going to the gym were the options before him and how he would feel trying something he could enjoy? He came out with options like going to a nearby park for a 45 mins walk in the mornings and playing with his kids during the week-end. I asked him how does he feel now and he said, he felt enthused and excited to explore these options.

It was an effective method as it help client improve his awareness levels and made him think and visualise other options. Also what the client earlier thought as barriers (late office hours) was actually not the case as the client shared that he was in complete control of his schedule. Hence, the problem lied in his lack of interest in going to the gym and not having explored options that would excite him and help him achieve his goal.

I found this approach effective as I was able to make the client improve his awareness levels, think and visualise his goal with other possible options. He was then able to put a structure in place and ensure accountability for himself as he felt excited about the plan.