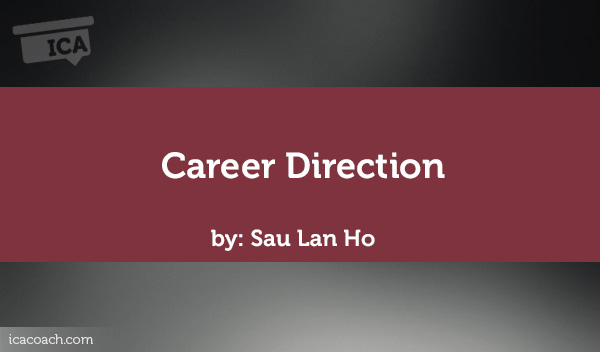 Lisa (not her real name) is a regional talent acquisition lead in a multinational Recruitment Process Outsourcing (RPO) company. A friend who is a qualified coach introduced Lisa to me as he knew I had undergone a coaching course and have some coaching experience in my previous job role.

Lisa was feeling frustrated with her job and was contemplating changing her career and she wanted to engage a coach to help her figure out whether that was something she should do.

Prior to the meeting

As it was my first coaching session with someone who was not a peer coach, I felt a lot of pressure, and feared that I would not be able to be an effective coach. To better prepare myself, I went through all my CCE course notes a few times over and also reflected on what my peer coaches did well and which I could use where appropriate and the feedback given by my peer coachees.

Lisa and I agreed to meet at a café near her house. I had been to that café once and knew it was quiet at 5pm. But when I arrived 15 mins before the meeting, the inside seating was half taken and it was noisy, so I decided to sit outside. It was not an ideal situation as it was quite warm and the traffic noise was distracting. But it was better than being inside so I chose a seat where she would be facing the outside while I faced the inside (thus reducing distractions for me!).

I had sent Lisa a copy of the coaching agreement three days prior to our meeting so that she could have time to review the contract. I also made two hard copies to bring with me to the session so that we could both sign the agreements and each to keep one copy after that.

At the face-to-face meeting, I highlighted some of the important points that she should note with regards to the coaching agreement, namely:

I told Lisa that I would be honest and direct with her, and for the session to be effective, she would need to be open and honest with me as well. She was pleased to hear that.

As we did not know each other, I started by telling Lisa about my previous work experience in HR and my strong background in organizational development and employee relations. I invited her to tell me about herself and her job. She had been in the talent acquisition space for 6 years and had spent nearly 4 of that in the RPO company doing mass recruitment. Lisa spoke passionately about how she had consistently exceeded performance expectations and the satisfaction she got from placing candidates who later moved on to better positions within the company.

After the introduction, I launched into the crux of the coaching session by asking Lisa what she wanted coaching on. She told me that she was feeling very frustrated at work due to the following:

Due to the frustration she was feeling, Lisa was wondering whether she should move out of talent acquisition altogether and go into other areas of human resource management.

As Lisa was talking, I was feeling nervous and my mind went to many different directions, trying to think of a “powerful” question to ask.  I had to keepreminding myself that all I needed to do was listen actively and look for cues and clues which might help me understand the feelings and meaning behind her words, and not obsess over what to ask. This helped me to focus on her rather than myself.But I have to admit that it was difficult especially when we ere in an open space and there was noise coming from the next table and the road.

After Lisa stopped talking, I asked her what she hoped to achieve in the coaching session. She said that she wanted clarity on whether she should continue with talent acquisition or branch out to something else in HR.

It was difficult to pinpoint what to ask as an opening question. However I could sense that Lisa was rather stressed so I decided I should ask her what she enjoyed about her work to get her to relax and refocus her negative energy. Upon reflection, this is giving Lisa an opportunity to look at her situation from an Empowering Perspective.

I asked Lisa to recall an experience or scenario where she felt energised and highly satisfied. She spoke passionately about closing difficult offers with candidates and conversations with managers on career development for the candidates. She shared that she saw her role as not just a recruiter but someone who knew the candidates so well that she is able to work with the managers on career planning for them.

All the while when Lisa was speaking, she became more animated and smiled more, although she still looked serious. Her native accent also became more pronounced. I highlighted that to her and she was surprised. We discussed this and concluded that that it was due to her passion for her job.

There were many awkward pauses as I tried to focus and ask Lisa questions that would shift her perspective or help her come to her own realization of what she really enjoys as a career. I felt myself trying to fill in the pauses with questions, sometimes asking close questions like “Did you feel stressed when you took over their work?” rather than an open-ended question like “How did you feel when you took over their work instead of letting them do it themselves? How do you think you could help them and yourself in such situations?”

After about 30 minutes, I askedLisa her what she thought had contributed to her frustration keeping in mind what she had shared.In thinking about her reply, and in the process of speaking, she realised that she had a part to play in causing her own frustrations. We explored what we could do to reduce the stress and she actually came up with two solutions herself after I prodded her along.

By drilling down on Lisa’s positive and negative experiences, we were able to make her aware of what she found fulfilling and what she could do to reduce the level of frustration.

Ten minutes before the end of the 60-min session, I asked Lisa whether she had better clarity on her career direction. She said she was positive that her passion was in talent acquisition and the frustration she felt was a result of both personal and external factors. She was also quite excited over the fact that she had come up with a couple of suggestions as to how she could overcome her frustrations. She sounded happier than at the beginning of the session.

I took the opportunity to ask Lisa what she would do in the week to put her solutions into action. She came up with two action items and we agreed that she will give an update in the next session. Lisa was actually excited to continue with the coaching relationship. I was pleasantly surprised!

It is good to review the ICF core competencies prior to a session to ensure a structured, professional, and ethical approach. I found this boosted my confidence going into the session.

It is also important to check out the potential meeting place beforehand to ensure comfort, privacy and as little distraction as possible. And have a Plan B in mind if the meeting place suddenly becomes unsuitable.

I should focus on what the client is saying, and their verbal and non-verbal cues, rather than trying to think of “powerful” questions to ask, or thinking that I need to fill in the silence. I realise that I was putting unnecessary pressure on myself and that detracted from focusing on my client.

I have more work experience than Lisa and the solution to her problem seemed obvious to me, so there were times when I wanted to jump in to give my two cents worth of advice. It was very difficult to hold back, and there were times when I asked closed or even leading questions. I had to consciously refrain from doing that and instead tried to frame my questions such that she could think about her situation and come up with her own solutions.

Just as Rome was not built in one day, coaching is not a skill that one can cultivate overnight. I have to keep “honing my craft” by gaining more knowledge through reading, learning videos, coaching labs and sharing with fellow coaches. But my coaching experience has taught me that, besides head knowledge, the best teacher is experience, and that comes from practising, practicing and practicing until the coaching competencies become second nature rather than concepts that I have to consciously apply.

This was made very apparent to me in this coaching session as I kept going over the various competencies in my head when I should be concentrating on the client!

I felt a great sense of relief that the session went better than anticipated. I think I was very fortunate that Lisa is self-aware and was really committed to finding the answer to her issue. She was cooperative and open, which made my job as a coach that much easier!