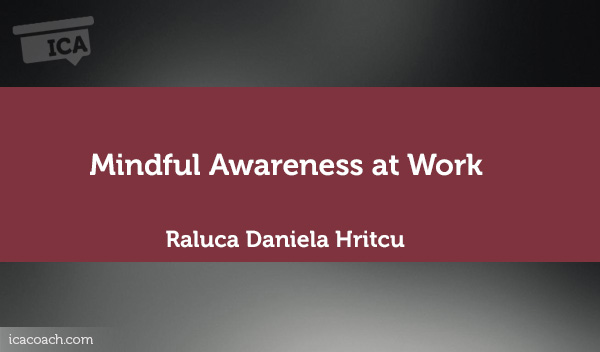 Myself (Raluca) – As a coach
Victor (fake name) – As a client

He mentioned he was unhappy with the performance of the team leaders at his office (his direct reports) and he was not sure how to make them perform better. He was stuck into being unhappy/ frustrated and not knowing how to react

He mentioned it happened in the past few weeks, but later into the discussion he admitted this was a pattern for him: being unhappy with various aspects of the work if his colleagues and compensating with extra work on his side

He felt he did not deserve his role and he saw no way out of it, he just felt this was his destiny. He was also considering moving into another company, but he knew he would eventually get stuck in a similar situation

He tried to address the topic but when his colleagues became defensive, he resumed working to compensate for their work and ceased to discuss about the topic. What he was not aware of, at that point in our discussion, was that an underlying belief was guiding all his actions and keeping him in his very sad state.

We created trust throughout our entire coaching relationship and we began our session with me manifesting an open mind and being non-judgemental, even when he said “You must think this is a very silly problem”. I assured him I hold no judgements and I am simply curious about his story and himself.

Powerful listening throughout the session allowed me to hear he had an underlying belief, as we has often using phrases like “I should/ I shouldn’t”, “people think that…”, “If you are wrong once, then …” and he held quite catastrophic views about any error that he might make (this is what actually kept him stuck/ unable to act: the fear of being wrong and of losing the respect of his peers and, ultimately, his self-worth).

Via powerful questions such as “what is important for you now”? or “what does that say about you” or “who are you as a team leader”? I managed to create awareness for him and ultimately to help him realise he wanted to act, to create action, to become unstuck.

Next, he talked about a plan on what to do next and then we discussed about the structures he wanted in place. He wanted to write some powerful words on the wall in front of him, at the office, to set some regular meetings with his team leaders and to celebrate his success.

It was successful because towards the end of our coaching relation, he started providing constructive feedback and started feeling ok about it. And changes in performance were also seen, both in his and in the performance of his team. He felt he became a better leader.
The coaching was effective because it was spread over a longer period of time (6 months) and because he felt he could trust me entirely so as to open up about his real thoughts and fears on the matter.

I would acknowledge more his success, right from the initial stages, when he felt he was not making enough progress and I wasn’t patient enough to help him understand why sometimes failing to meet his short-term goals was an element of progress, as it pointed out what strategy was ineffective.

1. To appreciate more every small step/ progress/ extra awareness level
2. To enjoy success and celebrate together with my client
3. To turn off (or at least to lower the volume 😉 ) of the consultant voice inside my head, who sometimes urged me to provide advice/ potential solutions.