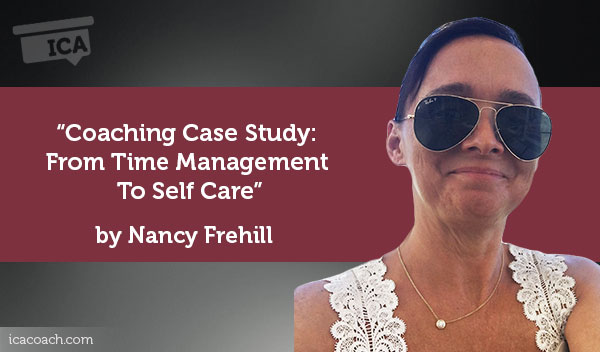 The situation that started out as a time management issue quickly became a self-care issue. Exhaustion and dissatisfaction with the quality of her life were the result of not rejuvenating oneself. Realization that productivity could actually be enhanced from better self care practices created the motivation to build in enjoyment/rest/relaxation into her week.

Sarah is a vibrant woman who works full time in addition to being a full time student in a doctorate program working on her PhD. She was eager to find a coach to talk about her time management issues.

Sarah described her hectic schedule to me. From her description Sarah is clearly a busy women with many responsibilities. She felt very drained “to a point of exhaustion as if I can’t breathe”. She wanted to work on her time management skills. Sarah thought that armed with new or better time management tools, she would be able to be more productive requiring less hours spent working and hopefully be less exhausted.

I commented to Sarah that I could feel her exhaustion in her voice as well as an urgency to figure the solution out so she could be refreshed and focused once again.  She said she did feel an urgency and anxiousness to finish her on-line masters program. Sarah spent many hours everyday of the week reading, researching and writing for her classes in addition to doing her full time work both of which required Sarah to be online working remotely in her home.

I asked her about where the urgency to finish came from. She replied that she was the first in her family to finish college as well as a master’s program. She continued to say that the first thing that her family would ask her when they spoke was when she was going to be finished. She said she felt hurt by the comments and wanted support from her family. Sarah felt irritated by their lack of sensitivity to what she was experiencing. I asked what she could do to about getting what she wants from her family. Sarah replied that perhaps she could ask them why they asked that question and why was finishing so important to them. Then she said that she thought it might be helpful for them to understand better what this program meant to her, what she planned to do with it and how much family support meant to her especially through the ‘tough’ times. I asked her how she would go about executing this idea. Sarah was quick to reply that she wanted to call one of her aunts to ask for this support. Sarah thought that by sharing more about her life and how important the degree meant to her that her aunt would more fully understand Sarah and give her the support she desired.

I wanted to check back with the initial goal of the session and asked her how I could support her in her goal to tackle her time management issues. Sarah thought perhaps editing her daily schedule more closely might be helpful to be more productive in a shorter amount of time. Her self-described to-do list was long. Sarah realized with a laugh that no matter what there would always be a to-do list that required her attention and becoming more efficient would still not solve her exhaustion. She said ‘I just can’t keep this ridiculous schedule up!” I acknowledged Sarah for her new awareness that being more efficient may help but that she would still experience exhaustion from not rejuvenating herself. I also commented to her laugh at the sudden realization of the situation. I thought that the laugh helped create some lightness to an otherwise serious session.

I asked Sarah what she did for enjoyment. She replied that she sang in her Church choir every now and then but missed many practices due to her busy schedule. Sarah said that she did like to go to Church but she felt pressure to return back to her studies and her computer right afterwards. I asked her what about singing in the choir did she enjoy the most. She said that she really liked her fellow singers and their company but that she hadn’t really gotten to know them since she rushed in and out of practice most of the time. Sarah mentioned to me that the choirmaster had asked her to sing a solo, which she did and thoroughly enjoyed getting lost in the song itself when she sang. I asked her how it felt when she sang the solo. She said that she felt amazing instead of nervous and anxious as she had felt when she was first asked to sing.

I acknowledged her for stepping out of her comfort zone and making the decision to sing the solo. I told her I could hear energy from her voice when she spoke of the singing experience that was so upbeat and lively versus her voice earlier on the call when she spoke in a low, more monotone voice about her exhaustive schedule.

I asked Sarah who was in charge of her schedule. How much control did she have over the things that need her attention? She said that she was fairly autonomous and that she was the one who was pressuring her self to get everything done. I asked her about the pressure she said she put on herself. She replied that she was tired of being in school, wanted to finish and get on with her future plans. Once finished with her degree she would be able to get a job that allowed her to have much more engagement with others; which was something she knew she wanted more of since she considered herself to be an extrovert.

I asked her what she might be able to do now so that she could feel refreshed and focused. She said she wished she had some support from others; that she felt very isolated and a bit lonely. I asked what could she do now to feel less exhausted and less lonely. She replied that she could linger before and after choir practice. She could accept invitations for coffee after church service on Sundays. She brainstormed a bit and came up with the idea of joining a gym as she had in the past because it had given her vitality and energy. All these ideas Sarah had would support her desire to connect and engage with others. I asked her what next steps she could take to support herself in her desires. She replied that she would spend one day on the weekend completely disconnected from any electronic device, not rush away from Choir and Church and research local gyms.

I asked Sarah if she had any takeaway from the session. She replied that she remembered she was an extrovert and enjoyed being with others for their company and the energizing experience. She realized that she needed to put more ‘fun’ into her schedule.

The next session with Sarah was very different. Sarah’s voice had lots of energy and her spirit was positive. She had had a great week. I asked her what made it so.

She followed up on her ‘no electronic device’ day and spent that time with her significant other hiking and reconnecting with one another. She said she enjoyed the beauty that was all around her as she hiked. She appreciated her significant other’s comment about how much he enjoyed being with her when she was focused on them instead being distracted with checking her computer or cell phone. It had been a ‘quality’ day.

Sarah also went to choir practice and did not rush out. She stayed and spoke with others learning that they were eager to get to know her better. Sarah said that at the beginning of her workweek she usually was exhausted and not refreshed from the weekend. She realized that it was because she never relaxed during the weekend that basically every day had become a work /study day. This particular Monday she said that she felt refreshed, eager and energized as a result of taking time for fun and connecting with others.

I asked how taking the time out to relax during the weekend and ‘not rushing from activity to activity’ had impacted her work and study productivity. She replied that instead of being ‘behind’ she was up to date and ready to go. She felt that she got more done when she came to the computer refreshed. I was asking whether or not this new mindset to enjoy life more was sustainable. Sarah said that she needed to be mindful to build in enjoyment into her week. She realized how important it was and knew the consequences for not doing it. Her motivation was high to continue because of the positive outcome she had experienced in just one week.

Through these two coaching sessions I learned to trust the process of coaching. It was Sarah who dictated that–time management – was what she wanted to discuss. I saw how Sarah figured out that the issue was more about allowing herself to take time away from her work/studies to refresh so when she returned to the computer she could focus completely and therefore be more efficient and productive. The goal changed from figuring out efficiency to what Sarah needed in her life in order to be more efficient. The shift came from asking questions that helped Sarah explore what was underneath the productivity issue.

I think that the sessions were successful in that Sarah felt more energized and happier. Sarah learned that it is, not only OK but also quite necessary, for her to take time out to do enjoyable things, like connecting with others, in order to be the more focused person she desired to be. I used basic tools like active listening, asking questions and providing a safe, non-judgmental space for Sarah to explore.  My active listening heard energy levels rise and fall.  The questions that I asked where very simple ones that helped open up the space for Sarah to think out loud about what was not working, consequences of not changing, her desire for change and ways to effect change. The true issue was not time management but rather allowing time to refresh and re-energize and to not feel guilty about taking good self-care. The surprise effect was that by taking good self-care she actually felt that the work she produced was up to her level and required a little less time to do it because she was refreshed and focused.