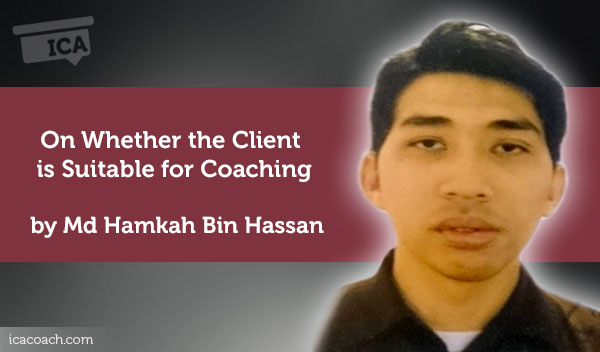 The client had been a Trainer for 8 years, focusing on Adult Training in the Adult Education Industry.

Due to the low demand in the Adult education Industry, his company’s boss encourage him to look at coaching as a future career path.

He is happy with his job, and is one of the good trainer at his workplace. He feel that coaching does not suit him. Firstly his character, he is an introvert, he like being alone and not socializing much. He prefer individual task.

As there is no urgency requiring him to change his career, he enrolled for coaching course to know what it about. .

K.E.E.P model of coaching was use during the session.

Knowing the client. Establish his trust. Let him be relax and make him be at ease. Let client share and open up, so that he can discuss his thoughts and views with me,

Encouraging the client. To be self-aware, to do self-analysis on himself and reflect through each consideration when he is answering a question or his thought process.

Evaluate the information shared by client and evolve the questioning process with the client as and when needed to focus on the goal setting. To bring the client to realize action he needed to do to reach his goal.

Plan an action plan with client. Action plan was created to help him with his meet his goal.

As the client keen with the idea that he came up during the session of practicing coaching with the people felt comfortable with. An action plan was created on goal of practice coach on people he knew and close with; to practice his coaching skill. .

During the coaching session, the following was achieved:

Active listening: I demonstrated my focus on what he’s saying with encouraging word such as a ‘right’, ‘I see’, ‘ok’ or ‘tell me more’. As the session was done over phone line.

Powerful questioning: I asked the client about the comparing his job as a trainer to a coach. This reinvigorated him to relate his skill and approach to the job. What skill and knowledge that he can use in coaching from his training experience. With pertinent questions, the client was guided to think through and become aware of his current reality status. He was able to then verbalize how he can use coaching and can then tabulate his ability base of skills, experience and strengths.

Direct Communication: I repressed questions and communicate effectively during the coaching session.

Got the client to consider and implement actions which will help him He now believes that this can help him focus in his goal.

Reframing Perspective: In order to get the client to reframe his perspective, I asked this question: What are the things that make coaching not suit him? I was to get to know his underlying believe why coaching does not suit him.

Designing Action: Base on the visualization, the client was able to define actions that will enable him demonstrate, practice and deepen his knowledge on coaching.

Planning and goal setting: Action plan was created to focus on helping the client to practice and gain experience in coaching.

Use of coaching tools:

The client had completed the Career Coaching Gallup Strengths Finder assessment questionnaire. We discussed the results and how they could be used in relating to his current review of coaching. Among his top strength was Learner. This is a Strategic Thinking theme and to him; it is appropriate for his abilities as a trainer. During the session base on the Learner strength. A strength question was ask on how his strength can be useful in coaching.

At the end of the session, the client confirmed that we had met his objective for the session of giving him an action plan to make a fully thought through on whether coaching suit him.