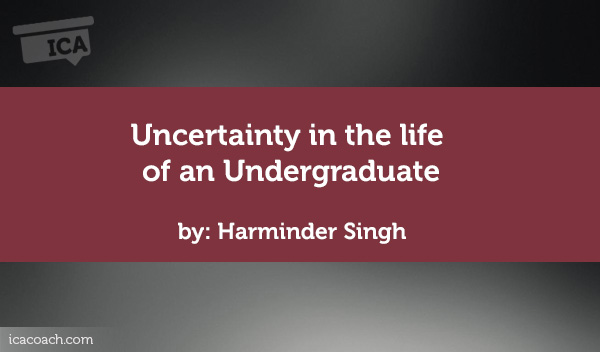 Adam is a current NUS Life Science undergraduate, graduating in July 2018. I have known him for a few years now, having met through a community youth camp before his university admission. He came across as having a carefree personality who was good at achieving short-term goals.He also enjoyed gaming and hanging with friends.

Prior to our meetup, while I felt it was important for me to suspend my impression of him in order to be an effective coach, it posed a big challenge. How does one put aside judgement on someone you have known for so long? I attempted to make myself mentally aware of this state of mind before the session, so that I could effectively coach him with a neutral lens.

In my opinion, turning off technology devices during the session is important to establish coaching presence. It gives a signal to the coachee that he/she is the most important priority in that hour. Another important contributing factor is a conducive space that is free from distraction. However, it is important to note that the space must make the coachee feel comfortable as well. For example, if the coach is male and the coachee female, the coach must be sensitive to coachee’s preference of venue. The coach could propose a few venue options for the coachee to select from.

To record notes, a clipboard with a few pieces of clear paper and a pen/pencil creates a sense of transparency with the coachee. The coachee is able to see what the coach is writing. This also supports the coachee into believing that the coach is present and not distracted by referring to notes during the session.

I began the conversation by building rapport through inquiring how life was like for him presently. What I found pleasantly surprising was that Adam could sense my non-judgmental attitude just by myself being mentally aware of it. It projected through my body language and words. I noticed hesitance when he shared that a significant amount of time was spent in gaming as a means of leisure. From his body language, I could sense he was expecting me to question the need for this activity. Instead, I acknowledged the importance of this activity to him as it allowed him to relief stress. This surprised him. It also resulted in increased trust between us as he could be sure I would not judge him. The result was a more open sharing.

Having established coaching presence and rapport, I introduced Adam to the coaching agreement, explaining what coaching was and was not. In addition, how it was different from Counselling or Therapy. Rehearsing the coaching agreement session is crucial as it involves communicating to the client what coaching is all about. It might likely be his/her first time hearing about this concept, therefore the communication must be direct. Indeed, many youth are not familiar with the concept of coaching. It is important to emphasise that coaching is a process whereby the coachee directs his/her goals and the coach supports him/her towards the goal, as opposed to being given advise about what to do.

Reflecting beyond the conversation with Adam and when I share this concept of coaching with my peers, a number of them think that a coach is not necessary because essentially, the coachee is in charge. The conclusion is “I need a coach when cannot do it on my own”. I attempt to explain that the goal of a coach is to remove the fog so that the path to achieve goals is clear.  But it is only after going through the first session when the coachee truly realises the effectiveness of a coach. In my opinion, the concept of coaching has not yet been fully understood by local youth.

Moving back to the coaching conversation, Adam communicated his desire to get a job upon graduation. However, he was unsure about the type of career he wanted to pursue. He initially thought that a career in research would be his goal, but after undergoing his Final Year Project, he realised it was something not suited for him. He also wanted to leverage on the NUS Career Fair to explore potential job opportunities.

We then established the objective of the session, which was to explore his career interest so that he could apply for jobs at NUS Career Fair.

Before exploring career options, I inquired more about Adam’s current state of life. We did so by drawing a table listing important activities during the week, and the time each activity consumed. The aim was for me to understand Adam’s lifestyle and strengths better,and for him to increase his self-awareness.I realised through this conversation that Adam liked to strategise and compete as he shared his competitive nature showcased during online gaming sessions. He was also a curious person who liked to explore new opportunities. He recently bought a cactus plant, followed by a terrarium and presently a fish tank.  He performed well when driven by self-defined goals, i.e.those goals he had full ownership over.Through this conversation and his Gallup Strengths Finder results, we verified Adam’s core strengths as follows:

Wanting to know more about his current state, I inquired about key timelines in his life for the next few months. Adam said that after the NUS Career Fair, he wanted to focus on finishing his Final Year Project report and study for upcoming exams. This helped me to set expectations of myself. I knew that apart from being an accountability partner and encouraging him in his exams and Final Year Project, my subsequent meeting with him would be after his exams ended. It is important the Coach understands the lifestyle and timeline of the coachee in order to fully support him/her through life.

I wanted to now gear the conversation towards careers. I explained to Adam that the concept of a career was more than just finding a job, emphasising the importance of aligning personal values and strengths with his career. Self-realisation of core strengths gave Adam the confidence to explore possible job opportunities.

Using powerful questioning, I then inquired what job options Adam had considered at any point of his 4-year university. He revealed that he had considered 3career options in the past:

It was interesting that all these options were well aligned with his core strengths. We furthered the conversation by considering if he had any experience in either of these options. Indeed, he had explored Research during his Final Year Project but as shared earlier, his Final Year Project made him realise it was not something he liked to do. Adam had also spoken to friend and seniors about Management Trainee and Marketing and Sales roles. He was impressed with both roles and believed it would stretch him.

Having identified possible career interests, it was time to drive the action plan. Through questioning, Adam listed the following action steps to explore and apply for possible jobs at the upcoming NUS Career Fair:

I offered to be Adam’s accountability partner. We also summarised key take-aways from the session and set a follow-up schedule after his exams. Adam entered the session feeling uncertain of the outcome, but left feeling confident. The cause of this change was his realisation of his personal strengths. This gave him confidence to set a career direction by clearing the fog via powerful questioning. Eventually, he had full ownership over his goals and was psyched to achieve them.

My key takeaways from this coaching session can be summarised by the following pointers: