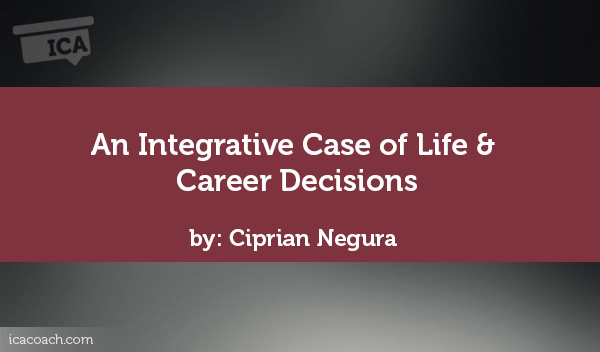 The case study I am presenting below is about one of my coachees, let’s call him Cristi, whom I coached between mid-Nov 2017 and June 2018. It is a positive case study in which the coaching sessions helped Cristi decide on a couple of important life and career decisions and act upon them.

Cristi is a very smart, hardworking guy, a bit introvert despite his good social abilities and having a nice character. At the time we started our coaching journey Cristi was displaying a lack of self-confidence amplified by a difficulty in setting up good-quality relationships with his peers in the office.

When he described the situation that was bothering him Cristi mentioned that, following a recent change of role, he felt he was not “seen” and appreciated by his colleagues and he was also receiving poor feedback from his boss despite delivering on time and good quality work.

His perception was that he was judged by his colleagues and that he was also having “low quality” interactions with his fellow colleagues during the multiple formal meetings he was organizing with peering groups from different departments due to the nature of his role.

Cristi also felt that he was serving others more than pursuing his own interests and was having difficulties choosing a way forward for his own career. He was ready to take new professional challenges and pursue new opportunities but he felt a bit overwhelmed by the amount of technological change in his field of business and was wondering where to invest his time and efforts.

The situation was making Cristi unhappy and fuelled a deterioration of his quality of life and self-trust, with impact in both personal and professional life.

Cristi has mentioned to me early in the coaching process that he was considering – together with his wife who was fully supporting him – moving to a different town as a way to regain the passion in both personal/social and professional life.

In the first couple of sessions, Cristi and I discovered together what was it about this new context that really bothered him and what was actually important for him to change.

By integrating coaching-specific tools like the Wheel of Life with another type of tools common in business (e.g. 360-degrees feedback) the process addressed both Cristi’s personal level (self & life) and the career dimension.

On a personal level, the first two goals agreed with Cristian were:

(1) to restore his self-confidence by clarifying – confirming or dismissing – his perception about the way he was seen and/or judged by his colleagues.

(2) me to provide to Cristi space & support needed for him to decide upon the idea of moving to a different city.

On a career level:

(3) Cristi wanted to also decide which role to apply for in one of the organization’s offices in the town where he wanted to relocate, had he decided to ask for the transfer.

In order to validate Cristi’s perception of the reality he was living in the office every day, we agreed that he should ask 360-degrees feedback from the people he cared most about: his peers in the same working group but also the ones he was delivering for inside the company as well as his boss.

The process extended over a few (2-3) sessions but the results were amazing:

Cristi discovered that his perception of how people thought about him was distorted by his own beliefs and biases and he also received good, constructive feedback even from the people that he initially perceived to be unfriendly and mean.

By acting upon the feedback received and also reflecting on it Cristi regained his confidence and was able to focus onto the big decisions he had to take in his life.

Also, the gap between his perception and the feedback received from his peers taught Cristi that he has to be sceptical and reflective now and then with his own thoughts, but also how to use the 360 degrees feed-back as a tool to validate peers’ expectation at work and build lucrative relationships in the corporate world.

With Cristi’s permission, I introduced to him and we applied the Wheel of Life assessment tool. The tool was instrumental for Cristi in deciding what was really important for him and what to focus onto in the particular phase of the life he was living.

Cristi realized he had a full and fulfilling life with his wife and she was fully supporting him but the quality of life living in a busy city was really bothering him. He discovered that it was the pace and the noise of the large city that was not comfortable for him. Despite being a social being and enjoying going out with friends and family he felt that living in Bucharest was too weary for him. He decided to enjoy the benefits of a social and cultural-rich town of Cluj, one of the Romanian cities that had enjoyed a steep development in the recent years, especially as a hub of innovation and becoming an IT cluster.

Our coaching process actually came to an end the day Cristi came to me and joyfully informed me he had received the approval for relocation to the office in Cluj.

He reflected upon the trends and developments of the world in his professional area but also on his skills, knowledge and aspirations that would serve as resources moving forward.

He realised that his attention for detail and thoroughness in developing new skills would be valuable resources in acquiring the new skills of the future like programming, an activity that he felt was also matching his profile.

As such, his new role in Cluj also involved dealing with innovation and software development.

The case of Cristi was a good learning experience for me at least for a couple of reasons:

(1) Firstly, the case involved both the emotional/psychological needs of Cristi with coaching-specific life and career objectives.

One of the first decisions I had to take was actually if the lack of confidence that Cristi was evidencing was a case for coaching or therapy. The decision I took was to integrate the skills and knowledge from my own previous mentoring processes as a first call resolution to validating Cristi’s perception of his corporate environment.

As such, I discovered that coaching is not to be perceived as a rigid and strictly delimited profession and can and should be integrated into a complete transformational process, regardless of the tools required for the particular change.

(2) Secondly, I have also learned that a coachee getting through the doors of the coaching room is, first of all, a complex, round person with beliefs, perceptions/biases and own view of the world surrounding him/her. Thus (a) reality is never objective but rather the collection of one’s experiences as filtered by his/her own mental and psychological context; (b) the border between life and career coaching is sometimes thin and/or the two spaces are overlapping becoming integral part one’s self.

As such, coaches have to be ready to address both Life and Career objective regardless of the marketing niche and positioning. We actually always coach the person along his/her journey of self-discovery and personal development.

(3) The last but not the least, even if the coach should just be there for the client creating the space for introspection and self-reflection that generate transformative insights, coachees have specific objectives and expectations from the coach and the caching process.

Thus the success of the coaching process is ultimately measured by the degree of clarity and/or progress the coachee perceives toward achieving his/her goals.

Moving forward with my own coaching development, I decided to allocate particular attention to the integration of tools and instruments from various disciplines into the transformative journeys that coachees embark in.

Combining own personal development experience with key learnings from coaching processes like the one described in this Case Study, I became a strong believer in the power of integrative transformation, where the right type of intervention is applied to the context of the coachee in a way that boosts performance and accelerates coachee’s transformation.