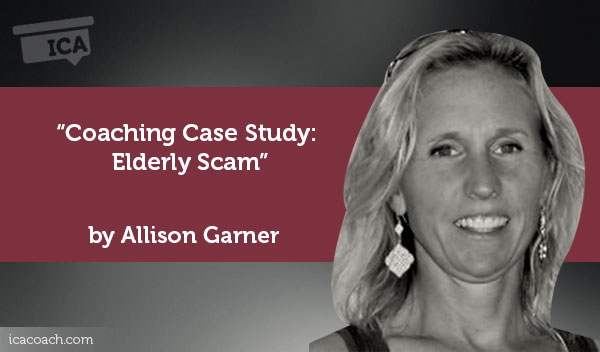 This case study involves a woman named Sue and her struggle to deal with her elderly mother’s recent marriage to a much younger man from a different country.

Sue has been unable to solve the problem because the marriage does not involve her.  While Sue is directly impacted by her mother’s marriage, she cannot exert any control over her mother or the relationship.  Her attempts to alert her mother to the potential scam has been met with vigorous denial and defensiveness.  Sue and her sister even had their mother speak to a police officer regarding these marriage scams, but Sue’s mother insisted her marriage was real and stopped talking to her daughters for a few weeks.

For this conversation, I employed power listening and power questioning, as well as visualization.  Additionally, I acknowledged her feelings of fear and frustration with her mother’s decision to marry a person that Sue thinks is a criminal.

Because this was not a formal process, I did not begin with an agreement and explanation of expectations of client and coach.  As a long-time friend of mine, trust was already established.  I have been discrete with her in the past, and we have shared some really deep conversations.  I began with powerful questions regarding her feelings about how this marriage affects her, what she plans to do to move forward, and to reflect on what her attempts to stop the marriage have been received.  By being fully present and actively listening, I was able to hear the frustration Sue is experiencing.  I reflected back what I heard to ensure good understanding.  Lastly, I asked her if she could visualize a day in the future where she could be at peace with her mother’s marriage.  I asked her to if we could follow up soon and review how she is coping.

Sue was really adamant in the beginning of the conversation that she needed to do more to force her mother to realize the huge mistake Sue thought she was making.  It wasn’t until I asked Sue to visualize herself at peace with the marriage that Sue stopped and paused.  I felt like it snapped her out of her anger and frustration.  After a brief pause, she answered that she could not imagine ever being at peace with her mother’s marriage.  However, she did say that she realized that she is making herself miserable by trying to force her opinions on her mother.  Her plan was to stop talking to her mother about the marriage and see if their relationship would improve.

I would have asked Sue for permission to coach her.  I probably would have pushed a bit harder on her need to alert her mom to her perceived danger with this man.  I also would like to explore Sue’s need to control. Lastly, I would have liked to develop some next steps and schedule a follow-up meeting.

First, I learned that I can coach.  It came quite naturally, and I really enjoyed listening without feeling as though I had to help by providing my friend with an answer.  I could simply listen and be fully present for my friend.

Second, I learned that I struggle not to judge.  Because Sue is my friend, I felt the need to make judgement just to please her.  However, I was able to hold back on verbalizing my judgmental thoughts and slow down my brain.

Third, I am beginning to see that there is usually something deeper than the issue at hand.  Sue’s need to force her opinions on her mother come from a place of fear.  I suspect there is more that fear than just her mother becoming a victim of a crime.