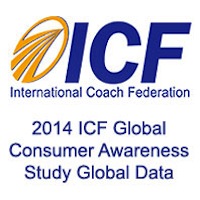 Findings include 58%of 2014 respondents saying they were aware of professional Business and/or Life Coaching which is a 7% increase on 2010 findings.

Eighty-five % of coaching consumers reported that they were “somewhat” or “very” satisfied with the coaching experience. When the same group was asked, on a scale of 0 – 10, how likely they were to recommend professional coaching to colleagues, friends and/or family, the mean score was 7.14.

ICF members can download the full paper here: Coachfederation.org/consumerstudy2014.
(The executive summary is free to ICF Global Members and $15 USD for non-members.)

The summary data is available for everyone here: coachfederation.org/files/FileDownloads/2014GCAS/Global.pdf

Want to become a certified coach?
Try out our training for Free

Come along to an upcoming Coaching 101 teleclass and learn more about coaching, questions such as, building your business, earning potential as well as learning skills that will help you on your road towards earning your certification in coaching.